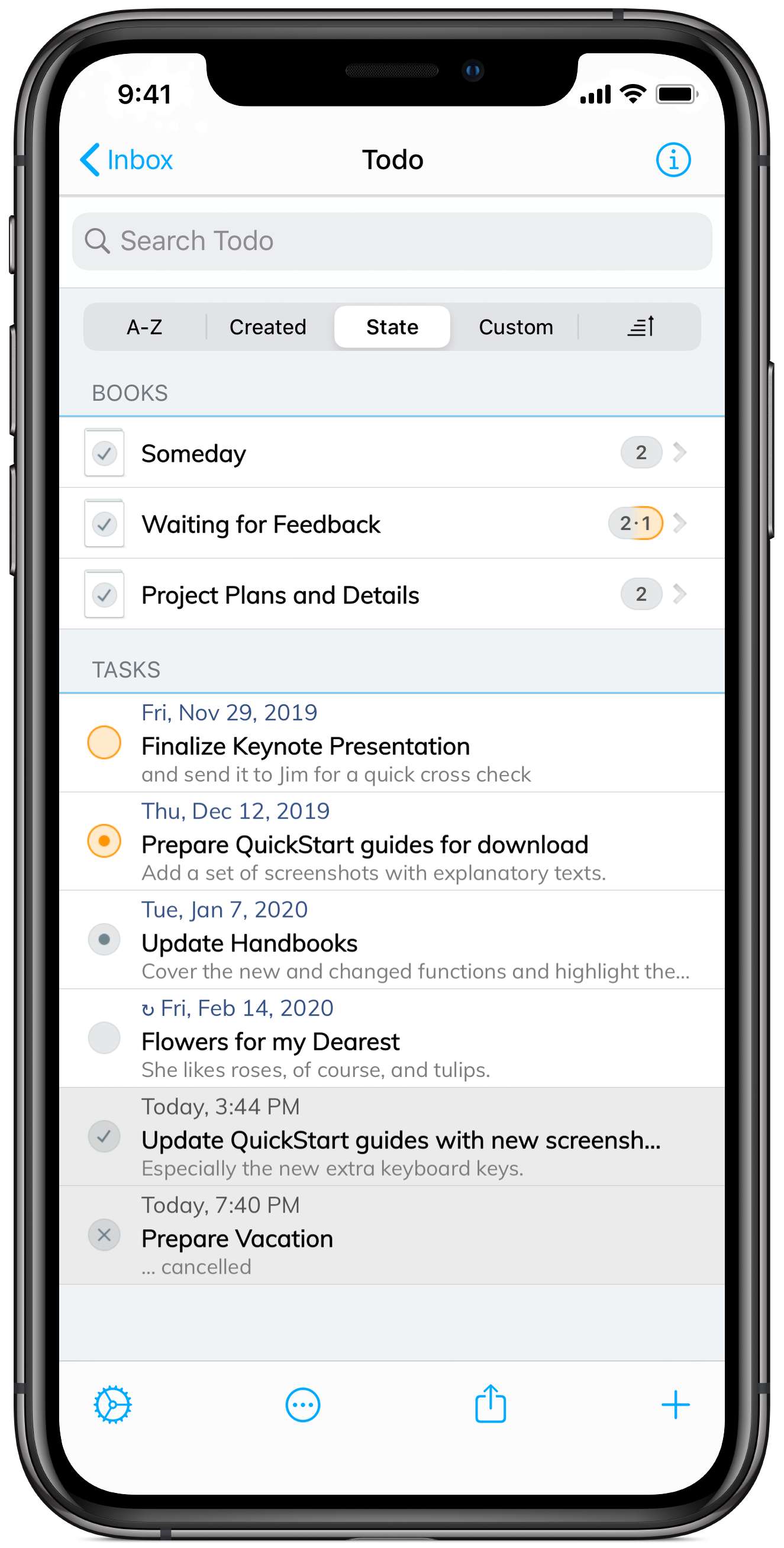 A task list in Notebooks is basically a book with slightly modified behavior:

To convert a book to a list, simply turn on the switch Show as Task List in the book’s info page.

Tasks can have one of several states, which you simply change by tapping on the icon in the list.

You set a task’s due date and alarm in its info page. When a task becomes due, its icon turns orange and the task list’s badge indicates the presence of due actions. Also, Notebooks’ app icon on the Home screen shows the total number of due items.

What its Special About Notebooks’ Task Lists?

As long as Notebooks is locked, it does not give you any indication of protected items. So you will not see protected tasks, either, and the badges shown along with task lists will not count protected or due actions. There is one exception, though: when a protected task becomes due, Notebooks’ app icon on the Home screen will indicate that, but to see the task and its info you need to unlock Notebooks.

For more details, please refer to our handbook.

I Don’t Get Notifications for Due Tasks

So the list of due task correctly shows up in the today widget, Notebooks' icon shows the correct number of due tasks, but no alert is played at the alert time. What is wrong?

An Intro to Notebooks’ Task Management

When you start using Notebooks' task management after using apps that are exclusively focussed on getting things done, you may be surprised by Notebooks' flexibility:

Because of the flexibility you may miss the corset of a clear separation into Today, Next, Scheduled etc., but Notebooks covers most of it. When Notebooks contains at least one due task, or if you set Notebooks to look ahead for due tasks, you will find a smart book Due Tasks at Notebooks' top level, which functions like a dashboard:

We hope that this brief overview can help you get familiar with Notebooks' way of task management. Read more...

How to Integrate Task Lists in Regular Documents (iOS)

In Notebooks, todo lists are books which display their contents as clickable tasks. That implies that each task is its own document, and it is not immediately visible how to manage task list in regular documents. - However, Notebooks is perfectly able handle todo lists that are embedded in documents.

Set up Notebooks to Extract Tasks

What may sound a little complicated is actually pretty simple. You type the meeting minutes, for example, add your actions and tasks by preceding them with your task marker; when done editing, Notebooks automatically creates a todo list for you (if you assign a default due date to these tasks, you will find the tasks in your "Due Today" book). Check off the tasks as you complete them, and when you open the meeting minutes document, you immediately see which of the tasks have been completed and which are still pending.

How to Create Todo Lists

To create todo lists you have two options:

The behavior of the book remains very much unchanged, except that documents are displayed as tasks. You can still put any type of document onto the list. Task lists are displayed with a modified book icon and show a badge with the number of open and due tasks. Just like books, task lists can be nested. This is a convenient way of breaking projects down into more manageable sub projects. At each level, a list's badge counts the open tasks of all sub projects.

To change a task's state, tap on its icon. You can do that in multiple places:

To change a task' due date and reminder,