It has been quiet here for a while, and as long time users of Notebooks know, that means we have been busy working in our labs. This update is one result of our efforts, and the upcoming (and already rumored) major release for Notebooks for Mac will be the other – even bigger – change. But one after the other…

What is New in Notebooks 8.9

New Icon for Some Versions of Notebooks

One of the most obvious changes, even here on the website, is the slightly modified icon. The universal version of Notebooks (the one that runs on both iPhone and iPad) now shows an icon with a blue stripe, while the Phone only version will stick with the original red stripe. This makes it easier to distinguish the two versions on the App Store. We are also using the new, blue icon in Notebooks’ logo from now on.

There are more relevant changes than that, though.

We always welcome user feedback, and while some ideas and requests are more specific than others, they can make a huge difference. The new advanced editing extra keys may seem very sophisticated, but if you write a lot using the on-screen keyboard of your iPad or iPhone, you know how hard it can be to select a word or phrase in order to delete it. Notebooks 8.9 provides a couple of very convenient shortcut keys that make deleting text a joy. 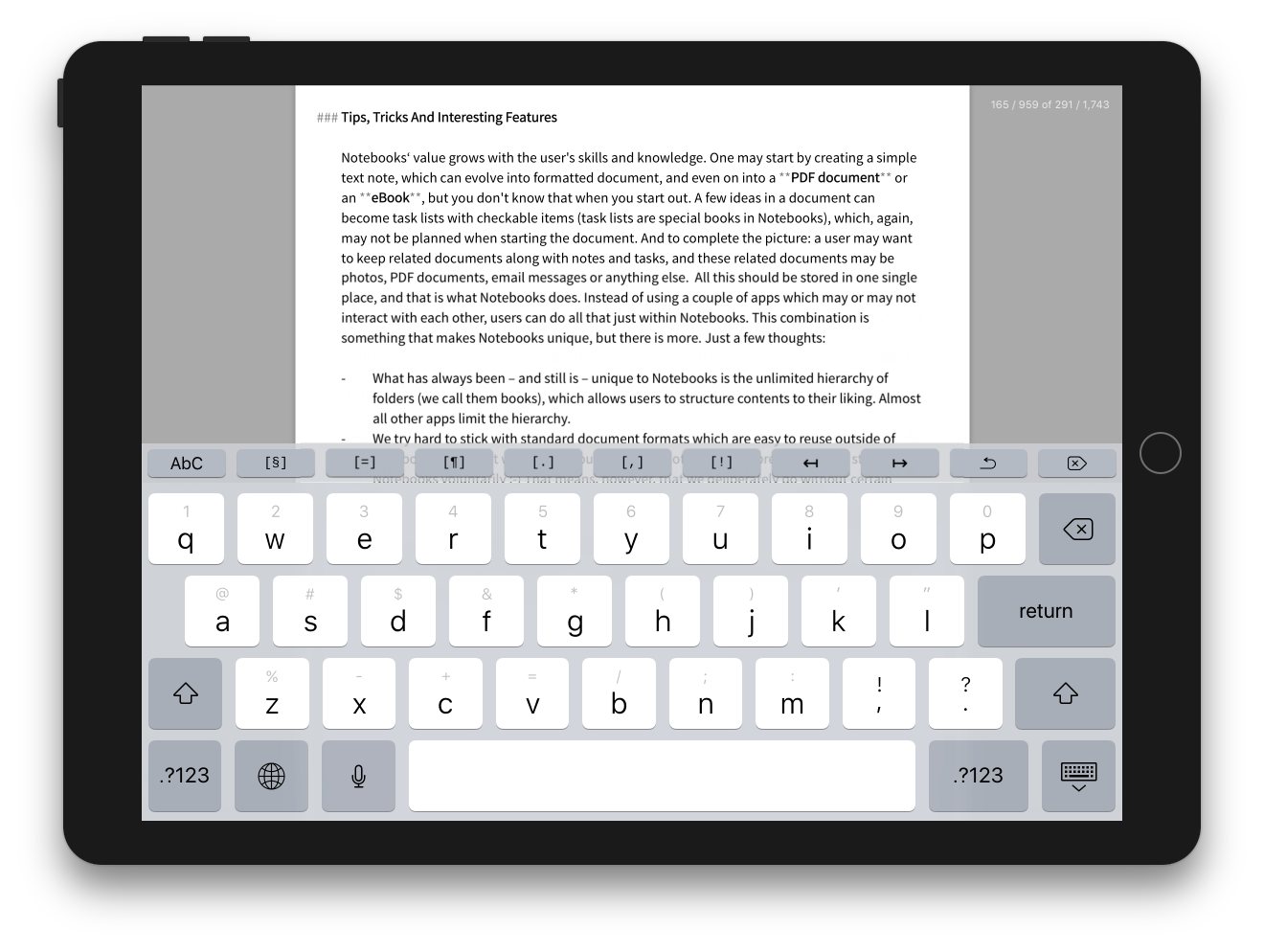 Forward Delete: [DEL]
Removes the character after the cursor. If you tap and hold the button, you delete the rest of the current line (this is what ctrl-k does on macOS).
The key appears as reversed backspace.
Advanced Forward Delete: [§]
Allows you to delete words, sentences or whole paragraphs with a single tap.
To be specific: Notebooks inspects the character immediately preceding the cursor and deletes the text after the cursor, up to the same character. So if the preceding character is a space, Notebooks deletes up to the next space, which corresponds to deleting a word.
Advanced Forward Delete Variations: [=] [¶] [.] [,] [?] etc
These are variations of forward delete, some of them are even customizable. For the detailed description, please refer to the online help or the handbook.
Text Transformation: [AbC]
Provides the text transformation options Capitalize, Make upper case and Make lower case for the selected text. If no text is selected, Notebooks applies the transformation to the word under the cursor.
Markdown Heading: ##
Use this button to set, increase or reset the Markdown heading level for the current line, independent of the current cursor position. Tap and hold that button to reset heading.
It is no longer necessary to put the cursor at the beginning of a line to change heading level.
Show Available Context Tags: @ or #
When using Notebooks’ option to extract context tags from typed text, it has always been a challenge to remember which tags are already in use: is it @wip or @WIP, or #workInProgress? Now you can tap and hold @ or # on the row of extra keys for a list of context tags that are already in use; select the desired tag from the list to insert it at the current cursor position.

In addition to adding new keyboard keys, we also tried to improve the usability of the extra keys:

The word and counter used to show the total number of words and characters in the current document. There are situations and use cases when the relative position within the document is far more important that the total count. So we have extended the counter’s capabilities to provide multiple modes, from simple to complex.

Just as a reminder: in two-up mode you can view and edit two documents side by side on an iPad in landscape orientation.

The PDF Reader received a major update with many corrections and improvements. The most notable changes:

The PDF Reader is an in app purchase.

That is it for this update, the todo list for the next releases is already building up.

As always, your comments, requests and reviews are welcome.

This update is available for download on the App Store.

Notebooks 8.9 for iPad and iPhone Available on the App Store

8 thoughts on “Notebooks 8.9 for iPad and iPhone Available on the App Store”